25 August 2017The Olympic medallist who balanced training with GCSE studies

After all the excitement of the past few weeks, the 16-year-old – the youngest of Team GB’s medalists – decided not to face the cameras and instead got her results emailed to her at home.

Tinkler, who last Tuesday took bronze in women’s floor gymnastics, said she was over the moon with the four GCSE grades she got this year in English literature, English language, Maths and French, though she declined to say what they were.

“I have now passed five GCSEs alongside training, Olympic trials and competitions which have given me just five full weeks in school throughout Year 11,” she said in a statement. The gymnast completed a GCSE in PE last year.
“I am now looking forward to returning to Durham high school in September to study my A-levels at the same time as I take my remaining GCSEs and prepare for the following few years of competitions, including the Commonwealth Games in Australia in 2018.”

Sixty percent of all the GCSE grades awarded at Durham high school this year were A* or A and 96.7% of the grades were A* to C, a slight fall from the 98.2% of last year, in line with the nationwide fall in grades.

Tinkler has been a pupil at the high-achieving independent school since she was three years old and in the run-up to her GCSEs her parents met with staff to design a special teaching plan to accommodate her 31 hours of training a week. The school’s chef was even tasked to cook meals that met her specific nutritional requirements.

“We took the decision with the family that she would do GCSEs over three years,” said the school’s headteacher, Lynne Renwick. “She did PE last year and this year she’s taken her English and Maths. Next year she’ll do her science GCSEs and she’ll also start a [PE] A-level course. Her A-levels will be staggered over three years as well.

“It has enabled her to keep up with her studies and she’s a brilliant role model for girls of all ages, because they see that she trains for 31 hours a week, but her homework is never late.”

The school’s director of sport, Lyndsay Lowes, last year taught Tinkler her GCSE PE course on Friday mornings before school. “We spent a total of 10 to 15 hours together one-on-one, but she still came out with an A,” she said, adding that she couldn’t put into words how it felt to have a pupil win an Olympic medal.

“You could see how much she was enjoying it,” she said of Tinkler’s medal-winning performance. “I was screaming at the TV and literally had floods of tears coming down my face. Just to see her in her moment, everything she’s worked for over her whole life time, for it to pay off like that is just amazing.”

Tinkler is not the first pupil from the school to take part in the Olympics. In 1952, diver Charmain Welsh came 12th at the Helsinki Games, and in 1988 figure skater Gina Fulton competed at the Calgary Winter Olympics. 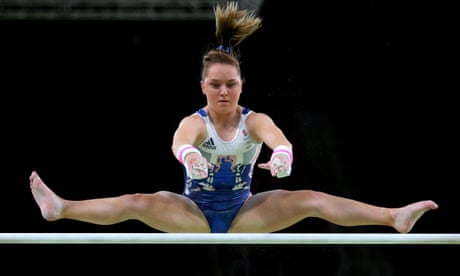 Friends of the gymnast said they were enormously proud of what she had achieved, training for Olympics and keeping up with school work. Jenny Tipple, who got nine A*s and two As and hopes to study bio-medical sciences at university, said her friend “completely deserved” her success. “She just worked so hard, so it means a lot that she has done so well.”

Tipple and her friend Dharshini Sambamoorthi watched Tinkler competing from their friend’s house, with a glittery homemade “Go Tinks” banner and inflatable palm trees – an attempt to recreate the atmosphere of Rio. Sambamoorthi, who got 11 A*s and is considering doing medicine at university, said Tinkler was now spending some time “relaxing and chilling”.

Another friend, Eve Welch, said she had stayed up to watch Tinkler compete and was “absolutely speechless” when she won.

“I was in there when she did her maths and English [exams] and I just can’t get over how she’s managed to get an Olympic medal and do her GCSEs at the same time. It’s absolutely brilliant.” Welch got seven A*s, two As and a B and hopes to study languages at university before becoming a translator.

“I think everyone is just so proud of her,” adds Tipple. “Not everybody can say they went to school with an Olympian.”

• This article was amended on 29 August 2016 to correct the spelling of Dharshini Sambamoorthi’s surname, and also to correct the number of A*s she achieved.